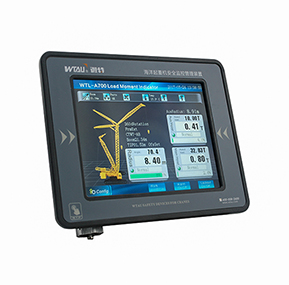 In the beginning, the crane device was simply called a computer. Then it became known as a load-moment indicator (LMI) and in some cases the technology has been referred to as a rate capacity indicator (RCI) or a rate capacity limiter (RCL). Whatever the moniker, LMI technology gives the crane operator a continuous read-out of the boom length, boom angle, and the radius – and usually an actual load weight.

Ken Martinek, crane specialist with Walter Payton Power Equipment, describes LMI this way: “It measures load moment, which is weight times distance. It's not weight on hook. It's not the actual load, but the load exerted on the crane.”

At the jobsite that takes the guesswork out.

“An operator can set up a machine and place the hook where they are going to set the load,” says Martinek. “That's really the function of a crane, to set the load, not lift it. The operator places the hook where the load is going to set, then reads the LMI and that tells him he's good for 12,000 pounds. He picks up the load and knows before he gets into it whether he can do it or not.”

“It provides a chart load based on boom length, boom angle and radius,” says Bob Bellman, training manager at Link Belt Construction Equipment. “It's an operator's aid that has become a valuable tool in crane operation, but LMI technology is only as good as the guy sitting in the crane inputting the data.”

When crane monitoring technology was introduced in the United States about 15 years ago, it met with a cold reception from crane operators. Although the technology had been successfully used in Europe for many years, U.S. operators were wary.

“We've come full circle with LMI,” says Martinek. “When it was introduced, there was resistance, particularly from crane operators. Now many operators won't run a machine that doesn't have a fully functional LMI.”

Bellman, who has spent more than 32 years in the business, has also seen the change.

“There was a lot of resistance in the early days to computers,” he says. “Crane operators didn't want to get into the cab if the equipment had a computer in it. Now it's gone full circle. Today, crane operators don't want to operate a crane unless it has some type of operating aid on it. They can see what a tremendous aid the systems are.”

To illustrate just how much of an aid to the crane operator LMI technology is, Bellman says: “If the system isn't functional, the crane is still a viable piece of equipment. You can still use it the old-fashioned way. The operator has to measure the radius, have some method of measuring boom angle, and then look at the chart to determine how much load can be picked. A good crane operator understands the chart and the notes on the chart that tell him where his strengths are and where he's not so strong. But an LMI does all that calculation for him and tells him what the load-on-hook is.”

Even side winds and side loading in foul weather are taken into consideration.

“An LMI has pressure transactors on the boom-lift cylinder that record if the wind is on the side of the boom or there are additional load pressures on the hook,” says Martinek. “Whatever the cause, it will register as pressure and there is a pressure profile that matches against the current load. If the pressure is outside the load parameters, the operator can take the appropriate action.”

According to a recent article in Lift& Access, the computer in a crane cab today is not just an LMI. It's also a data logger, lift planner, GPS system, engine management system, and diagnostic system. Systems like Link Belt's CAIC, for example, include sensors on the outriggers that even take into account when the outriggers are partially extended or not extended at all.

Some larger crawler cranes have multiple LMI systems with three monitors. One faces the derrick mast, one faces the boom, and a reference screen displays load charts and lift plans.

“Most major manufacturers of rated capacity limiter systems have retrofit products that can be installed on older equipment,” says Bellman.

According to Lift & Access, off-the-shelf systems include Greer's MicroGard-434 designed exclusively for Link Belt and Rayco-Wylie Systems 15,000-rated-capacity indicator, which allows operators to view all parameters of the machine in a graphical format and enables the operator to add features such as data logging, outrigger monitoring, and range limiting.

In fact, trends indicate LMI technology is becoming even easier to use.

“The Manitowoc 14000 has a graphic computer integrated screen that allows their rated capacity limiter, to give load conditions, boom geometry, and the loaded condition on the machine,” says Martinek. “It also provides the operator with machine information, such as diagnostics and other machine functions.”

As LMI systems become more sophisticated, the technology Is moving toward more graphical displays, which crane operators seem to prefer over old-style text displays with green, yellow and red bars that light up as lift capacity is approached.

“Graphic symbols are a lot easier to understand than verbiage,” says Bellman. “You have international symbols, as well, which supports the old adage, 'A picture is worth a thousand words.'”

Another technological advancement with LMI systems is the move to wireless operation. Wireless systems are particularly popular for retrofitting on large three-boom crawler cranes because they are simpler to install, according to Lift & Access. Instead of using wires, load cells transmit information by radio waves.

Kevin Blaney, product manager for the Manitowoc 14000, says there is a risk with wireless operation.

“With hard wire, you know it's always connected,” he says. “With wireless, you could run into some interference at times.”

Although LMI experts won't come right out and say the technology makes crane operation safer, Martinek did say: “From a practical standpoint, the operator is constantly aware of lifting conditions. There is no guess work involved, and guess work is where people get into trouble. As for financial benefits, I'm sure an insurance company would encourage you to purchase any machine that performs the job in a safer way.”

And safety is the top priority at any jobsite.